NanoPack Hackathon at the AIPIA Congress 2017

The NanoPack project was prominently represented at the AIPIA Congress 2017, which took place on 2-3 November 2017 in Amsterdam. 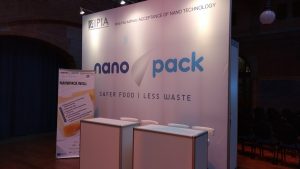 The centrepiece of day one of the AIPIA Congress 2017 was the ‘ideas’ hackathon on the topic  ‘The Acceptance of Nanotechnology ’ which was jointly coordinated by AIPIA and NanoPack. The hackathon brought together delegates from industry, academia, and consultancies who concluded that increased communication about the basics and benefits of nanotechnology is needed and the time to start educating the public about what nanotechnology is now.

In a time when the discussion on how to regulate nanotechnology and active packaging in general is lagging behind, it falls to the experts in the field, along with industry and retailers, to ensure that consumers are kept abreast of latest developments and the advantages they may offer.

Many lessons have been learned from the communication mistakes of the great GM debate of a decade or more ago. While nanotechnology is certainly an advantageous technology, it was agreed that the benefits have to be clearly communicated to the consumer if it is ever to reach its full potential. We need to start a conversation that focusses the benefits of active packaging in general as well as on tangible, personal benefits that this type of packaging can provide to the consumer above and beyond current food packaging (such as financial savings from reduced food waste at home).

In addition, a coordinated message needs to include all the stakeholders in this wide ranging subject. A collaborative effort between trusted brands, expert bloggers, other EU projects and the European Commission could enhance the impact of information reaching the public, by ensuring consistent and factual messages. A particularly interesting idea was to identify a well-known and trustworthy Champion who can speak up for the benefits that active packaging and nanotechnology.

While current interest among the public may be low, the hackathon group agreed that in order to establish a trust-based relationship between businesses and consumers, it’s imperative to establish an ongoing dialogue about the state-of-the-art with respect to nanotechnology and potential future directions. This will help to mitigate any issues at a later stage and avoid unnecessary rejection of these new technologies after significant resources have been invested to develop them.

Several nano-related products were demonstrated during the Congress, such as nanoparticles which can fight microbial growth and extend shelf life and the use of nano inks or deposition technologies for Printed Electronics. So the information is getting out there and at least the industry is engaging in the debate on the front, rather than the back foot.

In addition to the hackathon, NanoPack project coordinator Prof. Ester Segal gave a presentation on ‘How nanotechnology in packaging helps reduce food waste’ in one of the parallel sessions, highlighting some of the project’s preliminary results in developing active packaging that reduces fungal growth in bread and preserves colour in red meat products. 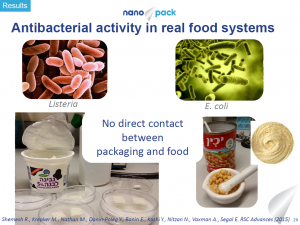 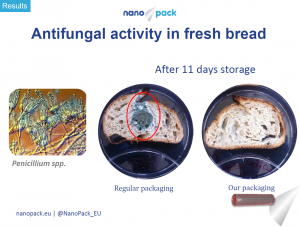